The night at the albergue with no heating was not that bad. I put on almost everything I had in my backpack and kept pretty warm. My cold nose and my steaming mouth reminded me of the acute coldness inside. Henry and Hiro took the night well too. After a sumptuous breakfast it was time to hit the road. 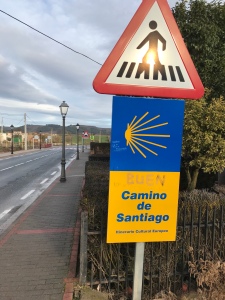 Today is Sunday. The closest big town, Santo Domingo de la Calzada, was 15 km away. There is a beautiful Cathedral there with an interesting history and one peculiar thing in it. There is also a tomb of St. Dominic de la Calzada there, the saint patron of pilgrims to Santiago. According to my guide a Sunday Mass would take place at 1:00 pm. We would have to walk at a brisk pace to get there on time. Just on the outskirts of the town we caught up with Hiro and walked together to the Cathedral. Both not being Catholics my pilgrim companions that day decided to join me for the Holy Mass. How nice! 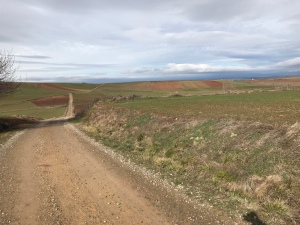 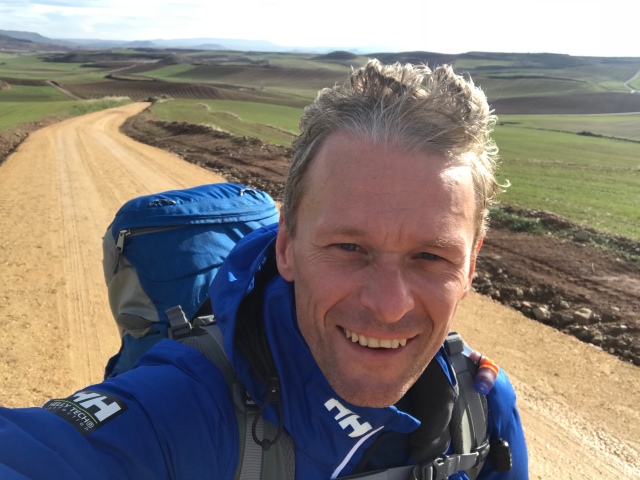 Generally I like the atmosphere at Latin churches. Though this one was Castillian it reminded me a bit of that climatel. Nice choir singing, relaxed people, altar boys fidgeting as if they had ants in their pants. I was most impressed, however, with the priest saying the Eucharist. He had positive energy yet was very focused. The sermon, which was directed mostly to the children, and thus fully understood by me, was said with passion and from the heart. During the most important moment he uttered the words of Transfiguration so solemnly I and my travel companions were really moved. As a side note, it is really a nice feeling to be able to fully participate in a Holy Mass in a foreign language. The Rosary I say everday I try to alternate between Polish and Spanish, which is helpful. 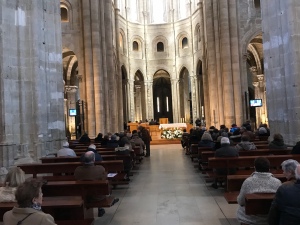 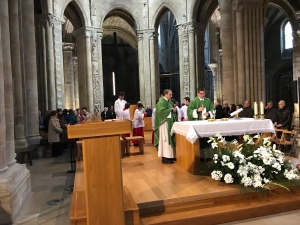 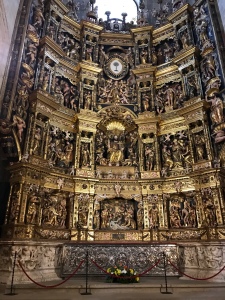 At the end of the Mass the priest, seeing that there were some peregrinos in church, said special Blessing for the pilgrims. Afterwards I went to the sacristy to thank him and ask for the Cathedral stamp in my credencial. It was worth it. The stamp had a peculiarity related with this very church , i.e. hen house. 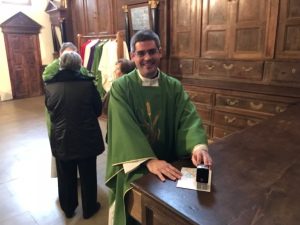 Indeed opposite the tomb of St. Dominic you can find a hen house with a few hens and a rooster. Just watch the movie below.

The legend has it that St. Dominic saved the life of a young pilgrim who was wrongly sentenced to death by hanging. When the judge, who was actually having a chicken for lunch, learned that the executed pilgrim regained his life, he joked that he must be as alive as the animal on his plate. The moment he said so, the chicken on his plate came to life as well. To commemorate this since XV c. there has been a hen house at the church where they keep a few live hens and a rooster. They rotate the animals once a month. 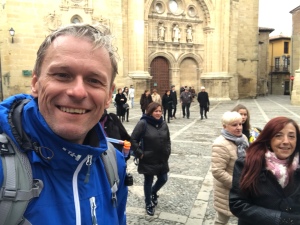 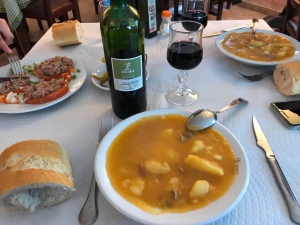 After the Mass we talked Hiro into continuing his journey at least to another town. There we bid farewell to him and wished each other Buen Camino. We continued our walk for 4 more kilometers leaving La Rioja region after two day.

Again we are in a town that seems deserted by people. Once we entered a local albergue a downpour came out of the blue. How can you not believe in Providence!?

Since albergue was totally empty I called a lady taking care of it by dialing the phone number on the door. We bought some pasta and tomato sauce from the albergue stand. Seeing our nice face the lady took out some already made, frozen drumstick, french fries and baguette. All of that was on the house. Henry made good use of it all and we had a good meal before turning in for the night. 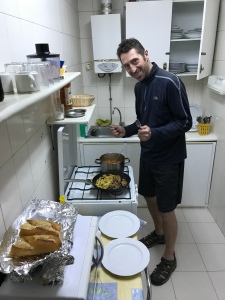 I always assumed that storks migrate from Poland before winter to the Middle East. Well, I have seen quite a few of them nesting here as well. 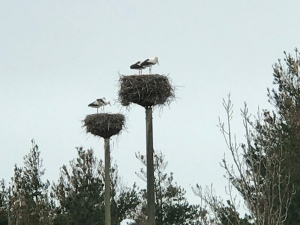 Medytacja VI. If you want, you can. I can. What do you want?

Today’s Sunday gospel has this a bit strange question or request asked by a lepper to Jesus. The priest I mentioned above encourage us all to reverse the question from the position of Jesus .. I am willing. What do you want then …?

So what do you want, really, really want? We usually do not name properly the things we actually want. We desire money, fame, lottery win, a good job, spouse! But what is behind it? So, what do I really want? That one thing, not to complicate things.