We do not speak Vietnamese

I have not felt so vulnerable in communication with the local people for quite a while. Usually I make it a point to learn some basic words and phrases in the language of a country I am about to visit. As for Vietnamese, I have come here with the knowledge of just one word, I learned long ago from a Vietnamese student at the university, i.e. Ba Lan meaning Poland. I was not even sure of that single word. I may have confused something, so much time has passed since hearing it.

At last I can empathize with our long time American friend, Walter, who has been visiting extensively Poland and CEE for many years with scarce knowledge of the local languages. Despite that he gets by pretty well except when purchasing train tickets at PKP. A lady at a counter will always surprise him with some new Polish question

Back to Vietnam, when I visited one of my favorite language websites at travlang.com and listened to a few phrases, I was racking my brain how to repeat it. Vietnamese is a monosyllabic language, where intonation plays a big role. It is easy to confuse words and sounds. Tough nut to crack. So how do we communicate? Ania has got a notepad where we draw things. The kids are in stiches watching us doing it. Recently I have heard even a compliment from little Ania about my drawing skills. The numbers are best expressed on a calculator. Unfortunately in this way I lost my Iphone, on which I was explaining something to a cab driver in Saigon. The only benefit coming from this experience was that I spent 4 hours on a motorbike exploring a big chunk of the city and visiting three police stations. All this effort to get a document for insurance claim. 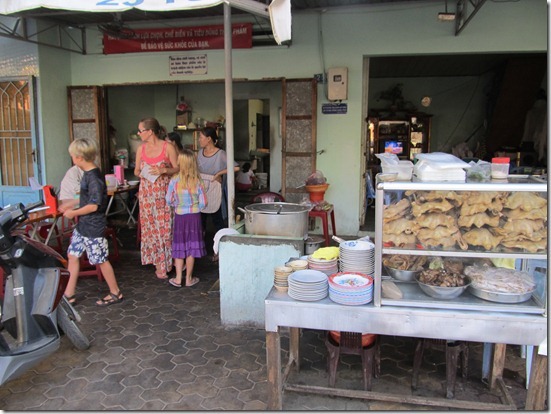 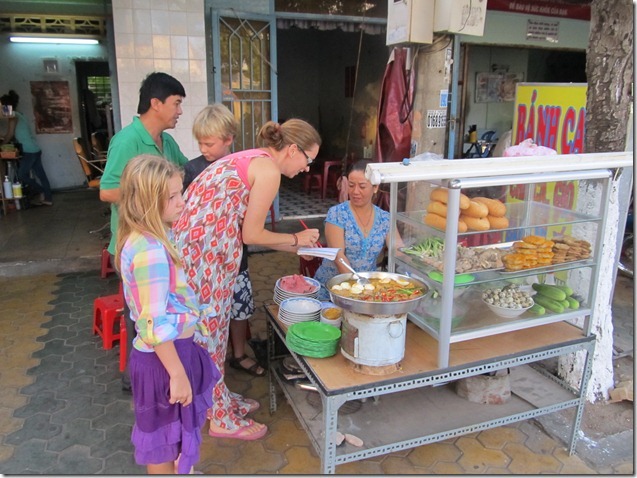 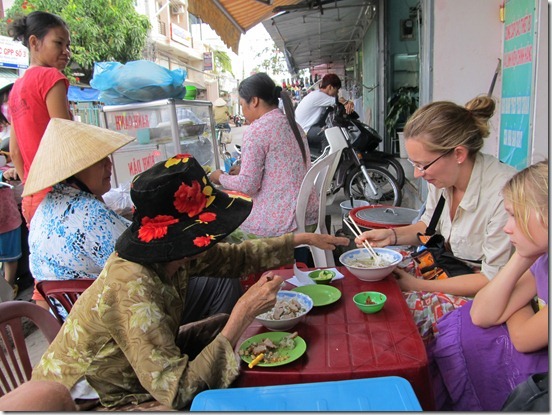 By the way, as for 11 months of travels it is our first bigger loss. Not bad indeed! To all those finding themselves in a similar plight contacting with the police in Vietnam I have a suggestion “do not give up”. It turned out that getting a piece of paper with a stamp is a big problem and favor. A few times I was told to give up my efforts. Even after finding a guy who translated my theft story into Vietnamese and put it into the report the locals were telling me it was too late to get anything from the police. Doing it the next morning was out of the question as we were planning to leave Saigon. So do not give up! After another hour of persistence I finally got a police report with a nice red stamp. Yeees!! I even managed to zen the whole experience rather than be mad with the whole world

Speaking and reading in Vietnamese seem at first not to be difficult. To our surprise they even use Latin alphabet and not some mysterious signs used elsewhere in Asia. The Vietnamese alphabet looks very familiar with all its dashes, dots, commas to the Polish alphabet. Unlike Polish letters such as Ą,Ę, Ć, Ś, the Vietnamese letters have can have dashes, commas not only above or below them but also at the sides. Some of those dashes or dots indicate six different levels of intonation. A Vietnamese talk sounds to me like singing. It sounds a bit like Chinese and indeed Vietnamese shares quite a few words with that language. 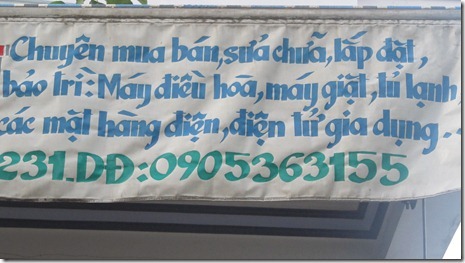 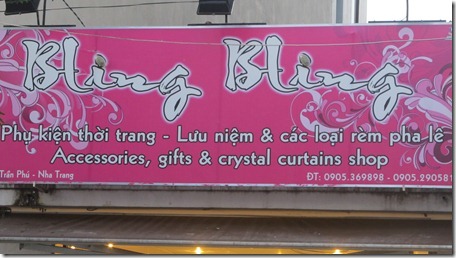 Apart from drawing the body language is also helpful. Sometimes it reminds me of a quibble game. After a few hours of gesticulation like that one can get tired

. Of course there is always English or French which is little spoken here. Despite poor education system some locals learn English by talking to tourists. A lady from whom we bought some fruit on the beach impressed us with her English. She has been selling fruit on the beach for 18 years and learning English this way. Though she said could only speak and not understand, it was definitely an understatement. We were all awed by her ability to put together quite a vocabulary of words into nice sentences. Anything is possible! 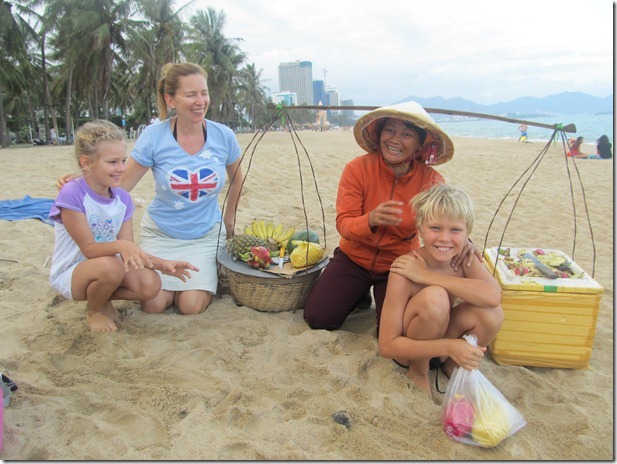 Learning English on the beach in Vietnam_video