Central America is definitely not a bunch of uniform countries. Though they share common language, cuisine and climate, what is different is the history and local emotions. We have felt this since entering our new country, i.e. Nicaragua (Nica).

At the border, on the Nica side we saw platoons of marching, armed soldiers, numerous symbols of Sandinistas (FSDN) along with their red and black flag (often appearing next to the official flag of Nica) and generally a bit of nervousness in the air. This is quite a contrast with the peace-loving, Pura Vida Costa Rica.

A swarm of “helpers” attacked us as we were leaving the bus at the border. They were offering all kinds of services ranging from currency exchange (local currency is Cordoba; 20 NIC = $1), assistance with filling out the border crossing paperwork along with the form (I did not fall for that trick and found my way to the immigration officer to get empty forms), luggage carriers and taxi drivers. 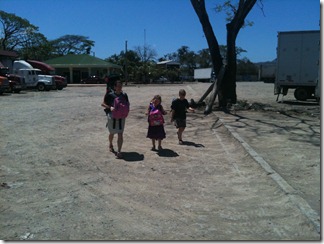 Instead of waiting for a bus to take us to our next destination, Rivas, we grabbed one of the taxis after negotiating the price. Taking a taxi was inevitable since there is no bus connection between Rivas and San Jorge, from where you can take a ferry to Ometepe Island.

“Pirate” taxis as quite cheap here, though you need to negotiate hard. In Costa Rica I paid around USD 18 for riding a 40km stretch in taxi (bus for the family would cost USD 9) in a very touristy place. In Nica it was even better, $12 for around 50km. Obviously, being on a shoestring budget we tavel mostly by bus. Sometimes, though, it is more convenient to pay a bit more and be more comfortable, especially when travelling with heavy luggage. There is one more benefit for me when taking a cab, a conversation in Spanish throughout the whole trip.

The transportation to the beautiful, volcanic island of Ometepe in the middle of the huge Lake Nikaragua (aka Colciboca) is an experience in itself. We chose a slightly more expensive and quiter option, i.e. a ferry. A more exciting version is taking a fast boat, lancha, on which you can be sure to get wet on rough lake waters. Back to the ferry crossing, the onboard entertainment are bloody, B-class, US movies, the experience, which is heavily commented on the web. Who would be interested in watching those? Maybe it is another sign of the war-like spirit of the locals. 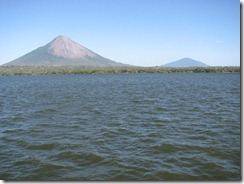 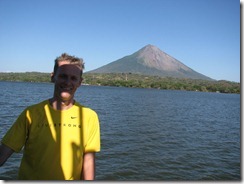 After reaching Ometepe, we stopped for 4 days in a beautiful spot called Hospedaje Soma in Moyogalpa, right at the foot of one of the big volcanoes on the island, Concepcion (1620m), which was quite active in April last year. http://www.youtube.com/watch?v=Unwycevd7Vg

The people in Nicaragua surprise us with their open attitude and joy. After years of suffering under the Somoza dictatorship, the Sandino revolution and then counter-revolutionary subversive actions by so-called Contra supported heavily by Ronald Regan, we expected the ghosts of the past to be much more alive here.