Just as I wrote in my previous post this morning we planned to refrain from reaching Santiago de Compostela until tomorrow. Due to some unexpected circumstances we had to adjust a bit that plan though. I believe there was some Divine intervention in it. More on that below.

Yesterday’s stage we ended in the last bigger town before Santiago de Compostela, i.e. Pedrouzo. We assumed there would be a choice of albergues there. Turns out they had only one municipal albergue open and without wi-fi to boot. That’s why we decided to find a B&B walking around the city a bit in the evening,
This morning as I was checking accommodation options just before Santiago I found out that generally most everything was still closed due to low season. Though I had already reserved a hotel for the following day in Santiago I had to be a bit flexible to accommodate this new situation. Besides I thought that thanks to such a change Henry, who is planing to continue his walk for another 3 days to Fisterra on the Atlantic coast, will have a chance to explore Santiago as well.
After making this logistics change we set out for the trail. 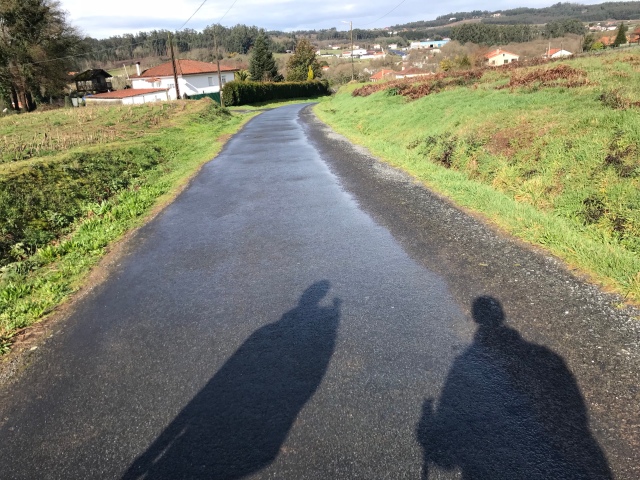 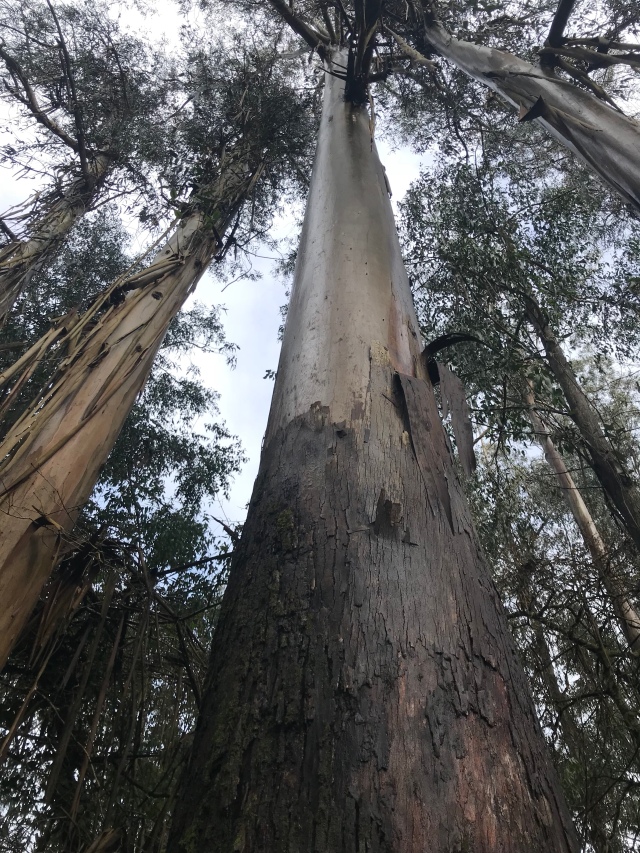 We were counting to have breakfast somewhere along the way.
I must admit that the last 100 km are somewhat surprising in terms of poor availability of the pilgrim infrastructure.
As late as noon we were able to finally find a roadside store where we could buy some coffee. I also got us two donuts. As we were talking a bit over coffee and donuts with a pair of German pilgrims, Sara and Walter (granddaugther and her grandpa) I realized that having donuts today was very symbolic. It was while having donuts 25 days ago when I met Henry, my walking companion. Today we are finishing our walk and have them again. We have not eaten this pastry since then. There will be a few more symbolic moments later today. 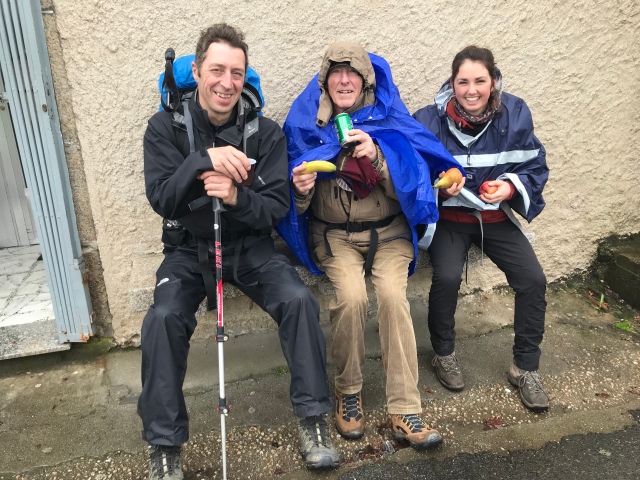 After another 1,5h of walk we get to the first open restaurant.

The weather is very changeable and dark clouds are hanging over our heads. We enter the restaurant for a late brunch. As usual we order similar items, i.e. mixed salad with tuna and pulpo, i.e. octopus a la Gallego and of course wine.

After leaving the restaurant it turns out that in the meantime a huge downpour fell on Santiago and now the sky is sunny again; first time in many days like this. I can’t shake the feeeling the Almighty might have had something to do with it.

First view of the Cathedral in Santiago de Compostela. Film

We are slowly entering the city summarizing our experiences from the whole journey. Finally, a few hundred meters from our destination we spot one of the steeples of the Cathedral, where the remains of St. James, the Apostle, are buried. My heart begins to beat faster. We walk through one more gate leading to the main square, Plaza O Obradoiro, and in the end we are there!! The sun comes out from behind the clouds and lights up our happy faces. The Plaza is incredible quiet at that very moment. That silence reminds me a bit of the state I have been walking in throughout most of my Camino.

We are finally near the Cathedral. Film

Hoorey! We are at the Plaza O Obradoiro. Film 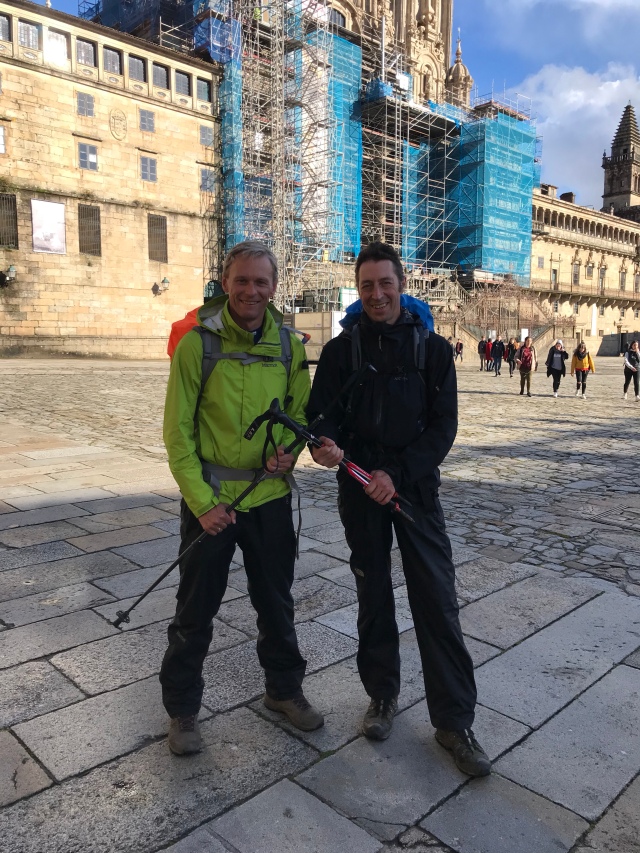 Then we go to the pilgrims office, where, after showing our pilgrim passports (credencial) with all the stamps we collected along the way, we will get a finisher’s certificate, Compostela.
I am served by a nice guy named Cesar. Learning his first name I say to him Ave Cesar …
Taking the opportunity I inquire him about a few statistics. He says that out of 380 pilgrims who came to Santiago last week there have been 6 people from Poland and 6 people from Canada. Interesting. Among the most numerous groups are Spaniards, Italians, Germans, French and South Koreans. It very much reflects the spectrum of nationalities we have met along the way. 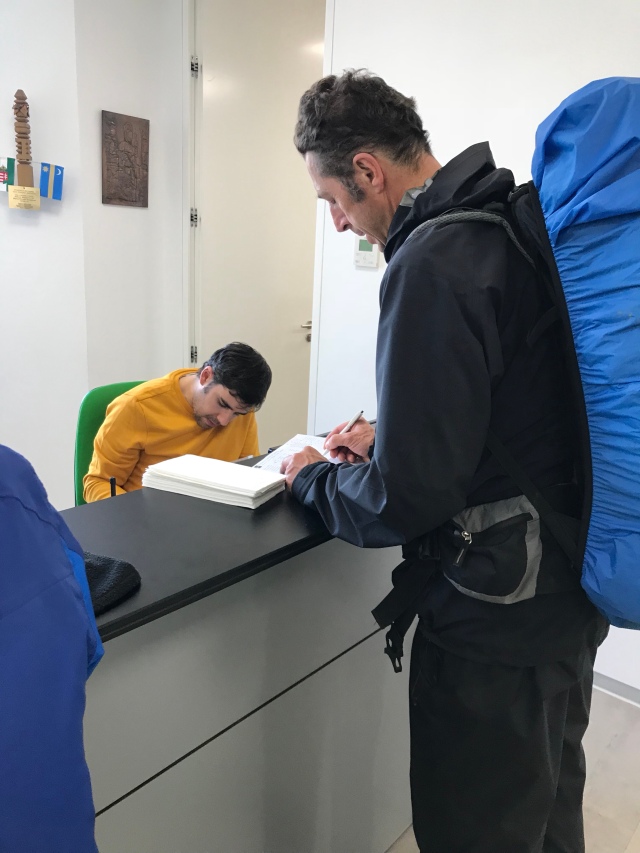 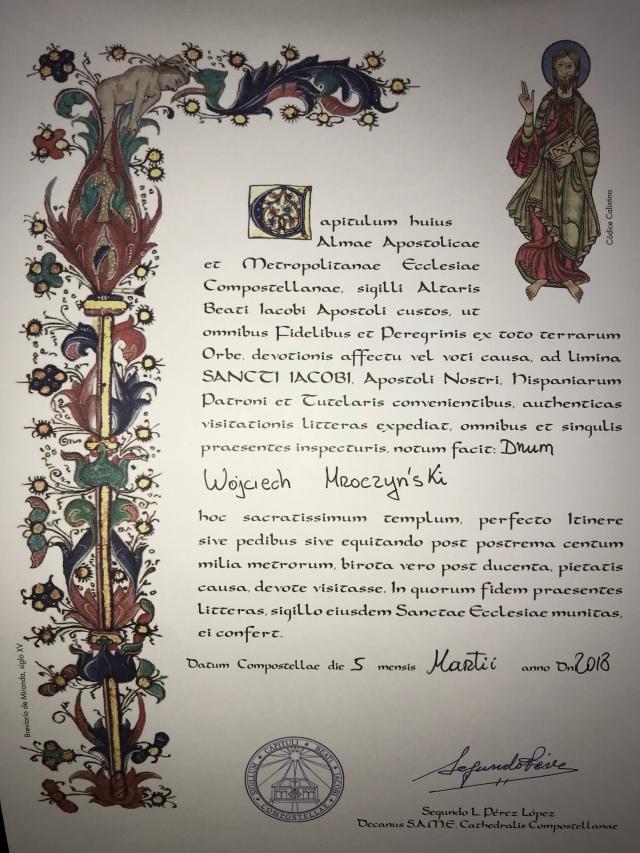 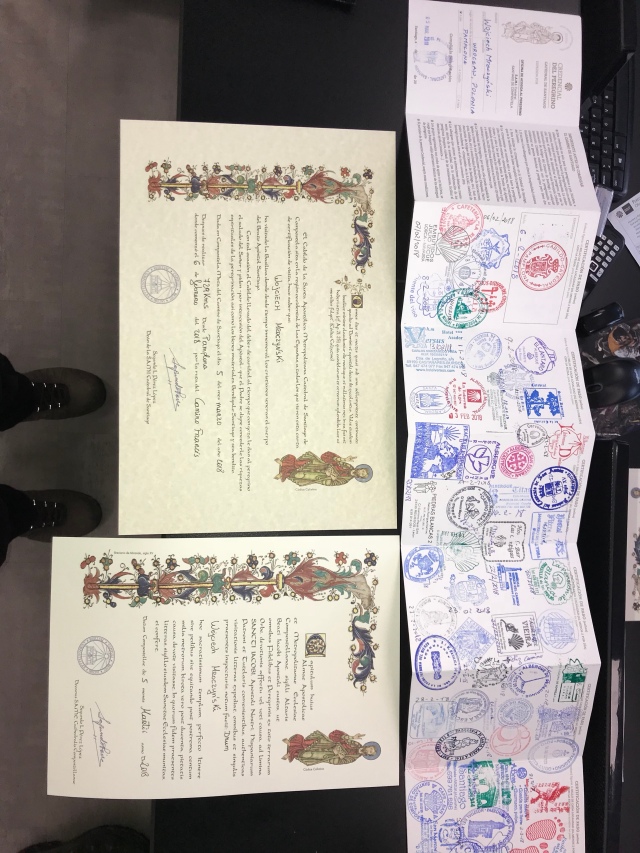 Then we go to the hotel that I booked earlier today while having lunch on Booking.com. This is still not the hotel I dreamed of staying at and made an earlier reservation at, the famous Parador de Santiago, which is right next to the Cathedral at the Plaza O Obradoiro. I decided to splurge at the end and reward myself for all those discomforts of sleeping in cold albergues with snoring pilgrims.

After check in, taking a shower I leave the hotel to get for the evening Holy Mass for pilgrims at 7:30 pm. Though the Cathedral is being renovated both inside and outside, the decorations you can see are breathtaking. The knowledge that one of the Jesus’s apostles is buried under the altar adds up to the gravity of the moment.
I try not to think too much about all that and focus on the Eucharist, i.e. Thanksgiving. I have got so much to be grateful for:
for reaching Santiago in good health and spirits, for meeting so many nice people on the way, for my new friend, Henry, for the prayers you have said for me, for my great family and for my life so far …

On my way to the Cathedral. Film

Altar at the Cathedral of Santiago de Compostela. Film 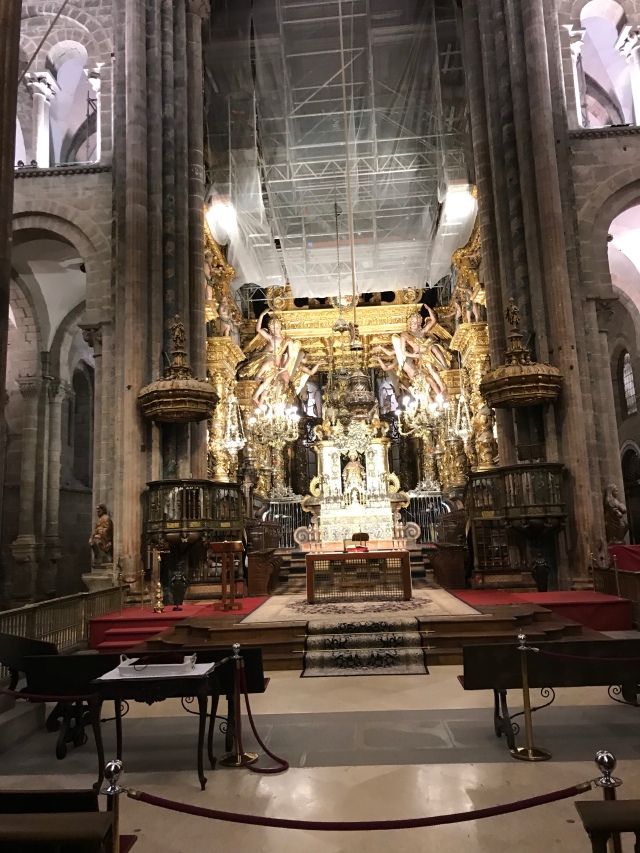 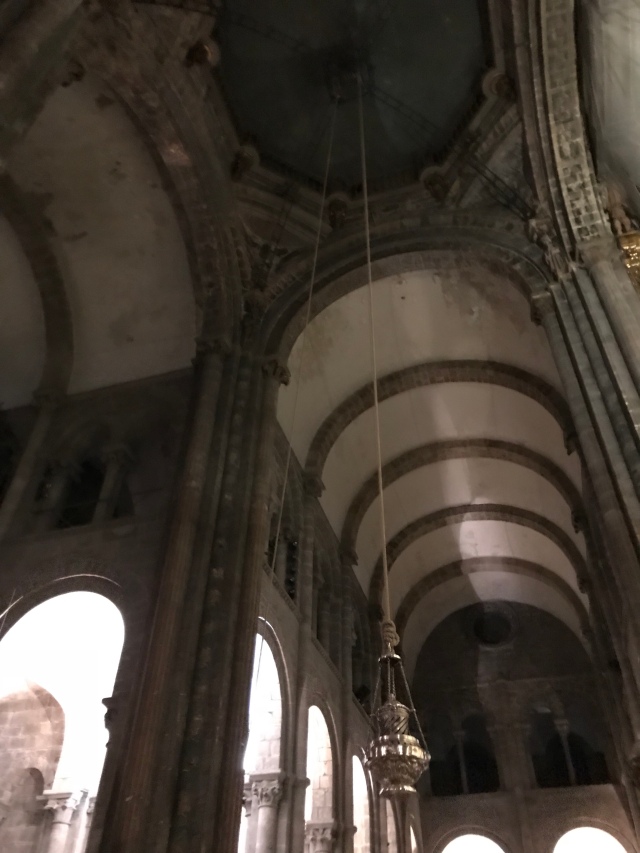 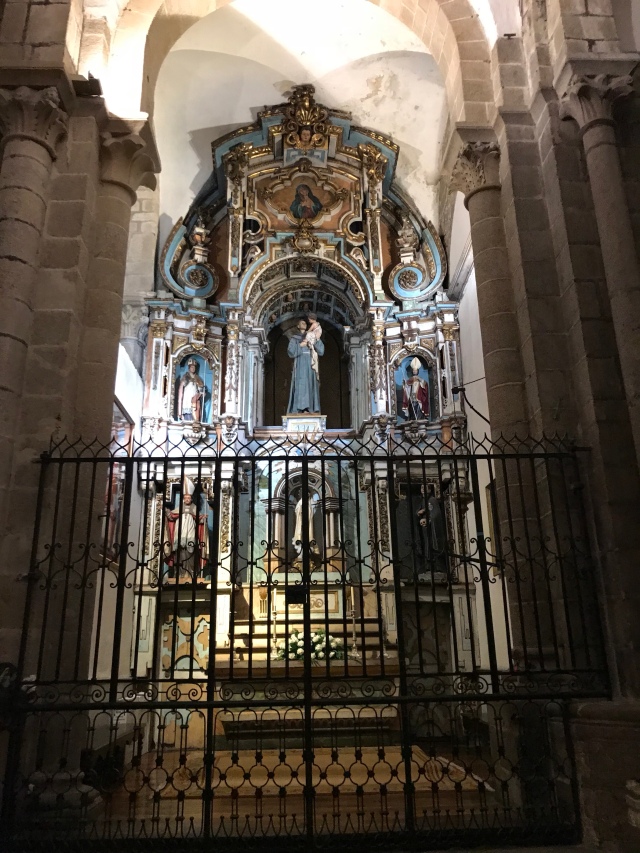 The priest celebrating the Mass surprises me at the begining by mentioning the countries of pilgrims who have arrived in Santiago that afternoon, i.e. Germany, Poland and Canada. Nice gesture.

The Holy Mass takes only half an hour including a short sermon. I stay a bit longer in the pew to gather all my thoughts I have come here with to offer to God.
Then I walk behind the altar to see if it will be possible to visit the tomb of St. James. Besides, I was wondering during the Eucharist, why, from time to time, I would see some hands emerge from behind the figure of St. James and hug him. I started guessing it must be some kind of pilgrims tradition. But to continue doing this during the Mass!? Madre mia!

Once I get there I see that there is only a handful of people left at the church. I walk up the figure, hug St. James and whisper something into his ear. When I go down to his tomb only Him, St. James and I are left at the Cathedral.

Entering the crypt of St. James, Cathedral of Santiago. Film 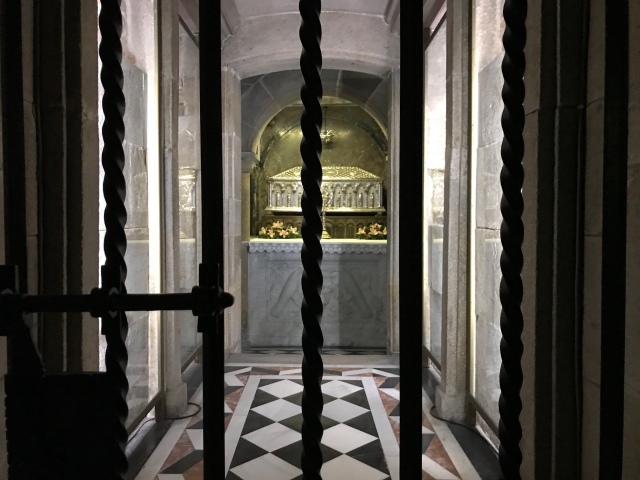 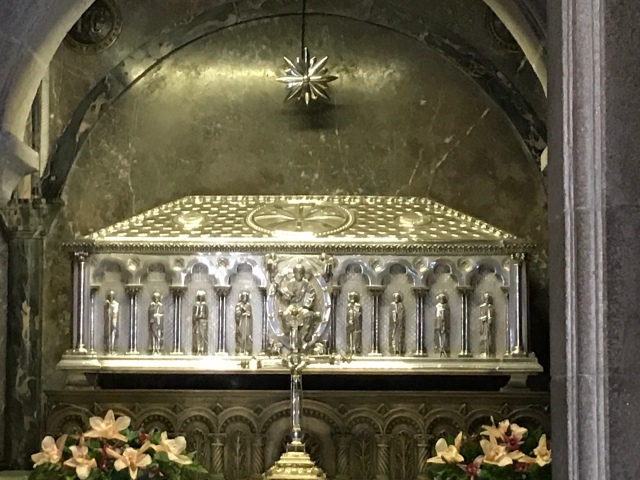 After this magnificent adoration leaving the Cathedral I once again enter Plaza O Obradoiro and admire its surroundings by night.

Then I wonder where to go and have some dinner. I want Henry to enjoy his time in the city by himself as well. The thought occurs to me that maybe I could visit again one of my company’s restaurants in the city. While walking through the old town a beautiful display of so called pinchos grabs my attention from one of the bars I pass. I go inside and see quite a crowd. There is only one stool left at the bar. I sit down. 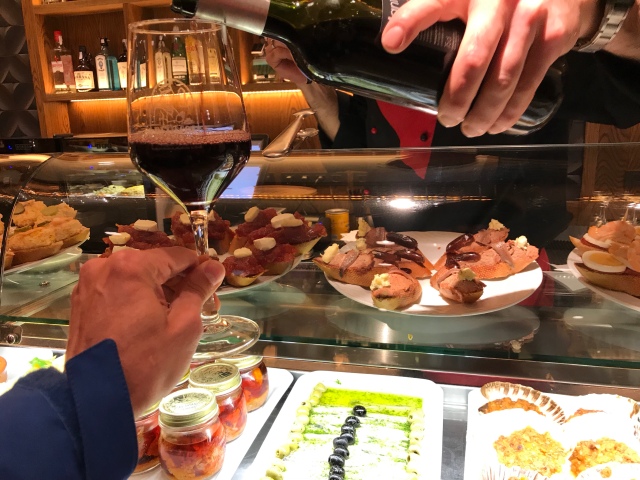 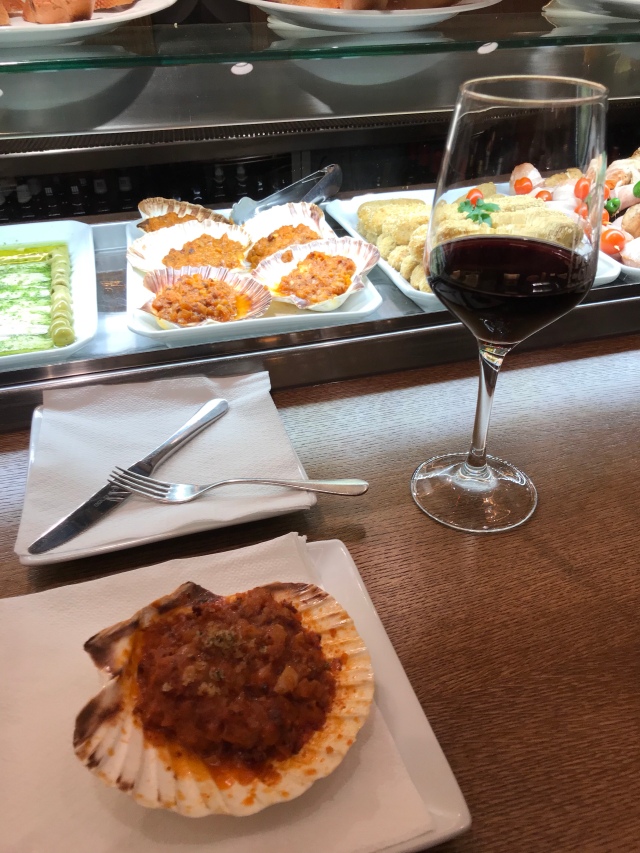 It turns out that a couple sitting next to me at the bar was also at the Mass in the Cathedral. Small world, isn’t? They come from Uruguay but have lived in a number of places around the world in recent years. Right now they are based in Miami. Anyway, after an exchange of pleasantries the wife, Victoria, admits that after leaving the church they were talking about me. They argued if that guy sitting a few pews in front of them was a real pilgrim or just a tourist.
Ernesto, the husband, claimed that I could not be a pilgrim because of the type of good clothes I was wearing. Victoria told him I must have been one because I stayed in the pew after the Mass to pray by myself.

And here I am some 30 minutes later entering the same bar where they went and sitting down next to them. Funny coincidence or perhaps not?

A conversation like theirs could happen to many of . I was disarmed by Victoria’s openess to share it.

At the end of this interesting meeting and conversation over pinchos at the bar Victoria asks me an intimate question about the moment of conversion in my life. I give her the short of my spiritual life line highlighting especially one event a few years ago I went through with my wife, i.e. charismatic Baptism renewal in the Holy Spirit.

When leaving the bar they invite me to join them tomorrow on their car trip to Fisterra, a beautiful town on the Atlantic coast, where some pilgrims continue their walk after reaching Santiago de Compostela.

Tonight at the Cathedral I asked St. James and God for greater clarity on my calling … I did not have to wait long for the answer. It came during the dinner.

Do not be afraid
JPII

Is not all human life like a struggle?
Job 7, 1

Approaching with Henry our final destination today I decided to dedicate the Joyful Mysteries of the Rosary to all of you reading this blog praying for your Courage.

From my own experience I know how helpful it is in life to overcome my own limitations and fear to pursue the unknown, at times to go upstream. If we want to improve ourselves and our lives we need Courage to deal with the fear that may be paralyzing.

I have no doubt it is a Gift of the Holy Spirit that we can ask for and receive. When I was a child I used to fear a lot of things, which caused a lot of concern by my parents. And today …

I would consider Courage as one of my Strengths.

I feel none of you doubts that our life is an endless struggle. I do not mean here „the struggle to secure the means and well-being” but the battle with the evil.

The wise man Seneka understood it very well by saying:

To live means to fight

So in accordance with the meaning of my first name I want to WOJ- (fight) bringing -CIECH (joy) to the world.

I was reinforced in this calling today by St. James and God.