The marimba is the national musical instrument of Guatemala. It has an amazing sound, and is usually played on by 3-4 musicians. In shape, it similar to a xylophone and it is made of palisandre wood. The sounds of marimba can be heard everywhere in Guate, even in church, where it is, not the organ, the main instrument. Listening to marimba I also realized that my cellphone ring tone is marimba as well. Maybe yours as well …? Just watch and listen. 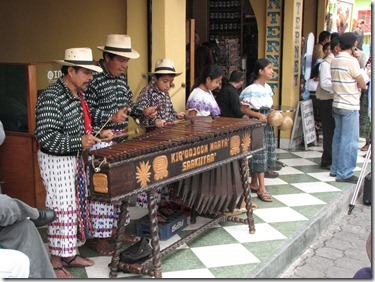 One night, while in beuatiful city of San Pedro, we were woken up by loud noises and singing. It began at around 2:45 am i lasted half an hour. At first we thought it was some youngesters on the way back from a disco. After listening more carefully to all the singing it turned out these were different serenadas dedicated to mothers. After all, the Mother’s Day has just begun!

By the way it is a bit peculiar that Mother’s Day is celebrated on different dates in different countries. In Poland, for example, it is always held on May 26. In many other countries it falls on the second Sunday of May. Here in Guatemala it is always on May 10.

One of the best coffees in the world are grown in Guate. Most coffee plantations, called fincas, are located in the south in the Sierra Madre region, around Lake Atatilan, where we spent many wonderful days, around Coban, Huehuetenango and Antigua, where we are now.

The local arabica (type of premium coffee) is characterized by full and velvety body, rich aroma and fine acidity. Such great characteristics of the local coffee are the result of the ideal climate for coffee growing (sun radiation, humidity, rainfall), elevation (6-9,000 ft) and fertile volcanic slopes. Coffee trees can be see growing wildly in many places. At the fincas, where it is grown more commercially, the coffee trees are often shaded by other, higher trees and bushes. It is done purposefully as the coffee tree does not like too much exposure to the sun. The local coffee blends, e.g. Casi Cielo, can be also bought in Poland and other countries at Starbucks, one of the restaurant chains run by my company, Amrest. 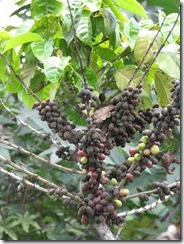 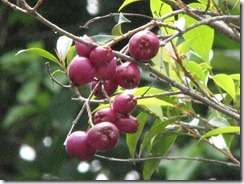 One of the Latin American tradition worthy of disemmination everywhere is Piñata. It is a play in which children, sometimes adults, try to hit with a stick a dangling piñata (a big doll made of fluffy paper) filled with candies. The piñata is usually held around Christmas time but is increasingly organized to celebrate other occassions as well. Enjoy the pictures and videos below!