As mentioned earlier, we have found the Nicaraguans extremely pleasant and hospitable. The life in Nica is, to a very large degree, unspoiled by modern civilization.  You cannot say the same about Costa Rica and Honduras, where we have just arrived. The farming is not as extensive here as in the developed world. Therefore, all the food can be called organic. They do not even understand that word! The fruit, vegetables, meat taste like they should and are inexpensive. They are still three times more expensive for the tourists, though. Feels like Poland 20 years ago. The only strong foreign brands here are Coke and Pepsi.

People are not in such a hurry and despite extreme poverty (average monthly salary is USD 70)  wear often smile and greet each other.

Despite years of fear instilled by the Contra sponsored by the US, Nicaraguans, look up to Uncle Sam in many ways. The national sport here is baseball, which is played on Sundays across the entire country. Many men wear US baseball themed sportwear. Interestingly, Saturdays are reserved for soccer, another favorite, local sport. The electricity (voltage, outlets etc), trucks, license plates and many other things are similar to their equivalents in the US.

The land is not as mountainous as Costa Rica or Honduras and is quite arable.

So it seems, Nica has a lot going for it.

The main thing, perhaps a blessing in disguise, influencing its slower economic development, is the local passion for endless revolution.

Though the Somoza dictatorship was toppled in 1979 and Contra dissolved in 1990, there revolutionary spirit is still quite strong here.

The mysterious shape of Augusto Sandino (the man in a hat) is ubiquiatous. It is painted on the lamp posts, its image overlooks the ugly and dangerous capital, Managua, and accompanies every election poster there is ( the presidential elections are due in Nov). Obviously, the only candidate for the President is the long-lasting leader of the Sandinista movement, Daniel Ortega. 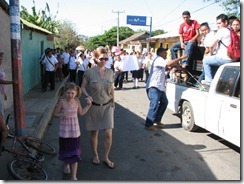 We could feel the revolutionary spirit even on the quiet Ometepe island during a protest of the secondary school students. Among the many slogans shouted, one went like this: “there is no revolution without sacrifice”.

Nica has recently provoked Costa Rica, grabbing some of its land along the San Juan River and sending their troops there.

We have been asking ourselves and the locals why this revolutionary propaganda continues. Most people just shrugged their shoulders in indifference.

On the way to Honduras we met Bob, a Canadian from Vancouver Island (just rated the nicest city for living in the world), who has been regularly visting Nicaragua for several months in the past six years. Bob praised all the things we noticed as well and treats Nica as his second land during winter time.

Though we still have a few countries to see in Central America, we have a feeling we will want to return to Nica regardless of the revolution. There is still  so much to see …

Quote based on “The Jaguar Smile: A Nicaraguan Journey” by Salman Rushdie